You are here: Home1 / Online Marketing Blog Posts2 / Electronic Agent Consideration: When AI Thinks About YOU

What is Electronic Agent Consideration? It’s the term that describes what’s going on when robots, artificial intelligence, compares your products and services to your competitors. Why is this important? When people use artificial intelligence to make decisions they expect their robots to be smart and live up to “intelligence” part, not just be some artificial voice that responds thoughtlessly with bad information.

Electronic agents only became practical recently. Devices that can be spoken to, understand requests, respond back verbally and fulfill requests are relatively new. We’re still learning the implications of using them, the ways to use them best and the silly things that happen when they operate outside what we expect them to do. They’re not perfect yet, and using them still requires a bit of patience. They’ve got access to all the digital information on the Internet, but they still sometimes lack workable understanding.  They’re doing a lot of thinking though. There’s a lot of processing going on. 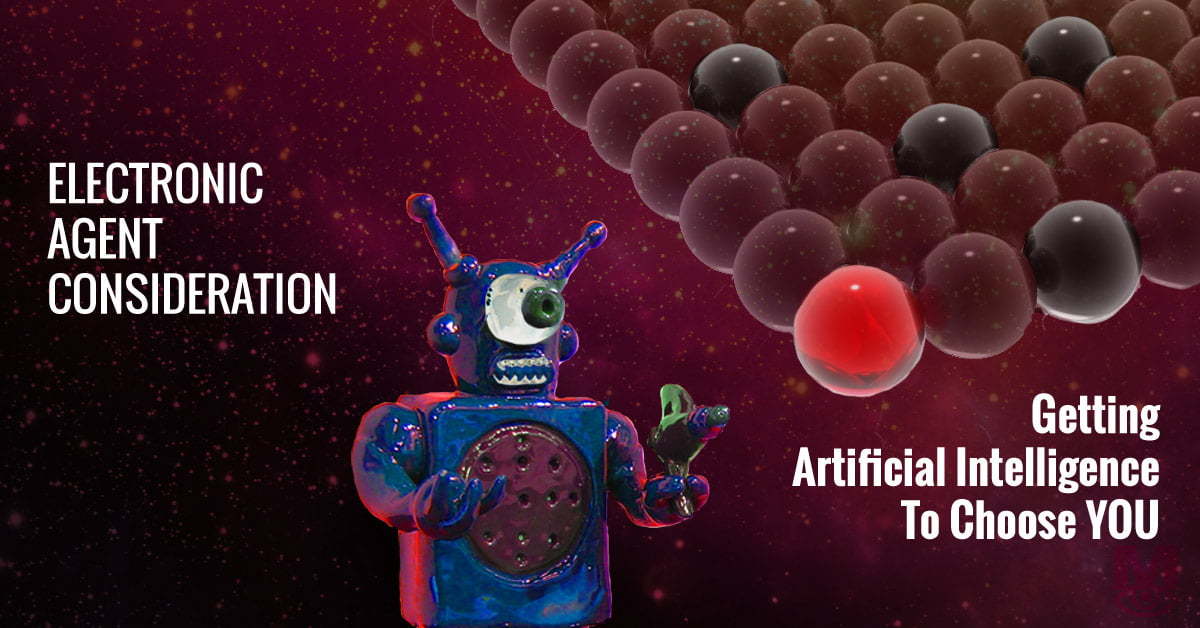 There’s therefore always going to be some kind of consideration going on behind the scenes where an electronic agent, a robot, becomes artificial intelligence put into motion. They’ll be analyzing data, considering it against your needs and finally presenting a conclusion that hopefully matters.

If you’re a marketer or business owner then you’re probably thinking “How do I get them to consider my business?” How do you increase your brand’s chances of getting picked during electronic agent consideration?

That’s a good question. We can’t exactly ask each manufacturer for the algorithms that drive the black box processes in the minds of electronic agents, but we can look at the inputs and outputs and make some pretty reasonable conclusions about the process of electronic agent consideration.

How does the artificial intelligence in today’s desktop appliances and smartphones work?

Aside from the limitation that we can’t peer inside each agent’s consideration process, we can know a lot about how these things work from looking at what goes into them and what comes out: the input and outputs. The process of getting an answer or action from one of these devices begins with the user stating a command. The command can be to either answer a question or perform some action that might involve asking questions. In these cases the agent has some kind of question that needs to be answered, some kind of query it has to pose to the resources of knowledge it has at its disposal.

What resources of knowledge do the agents have at their disposal? Of course they can do the same types of searches you can do on your desktop, through a browser. Practically though, that kind of information gathering process is somewhat slow. It behooves the manufacturers, if they want their agents to be useful, to empower them with a more immediate, more crystallized and organized knowledge base: their own databases filled with information pre-crawled from the web.

Facebook has its own separate “database” of information from all over the web called the “Open Graph”. This makes it so that when you do a search on Facebook, Facebook doesn’t have to use Google to give you answers – they have their own ocean of knowledge that follows their own rules, tuned for searches within their own product.

Electronic agents, whether they’re Siri, Google Assistant, Cortana, Alexa etc. all need their own databases of information crystallized and organized for rapid searching, within their own contexts, for themselves. They’re not using the same people-facing search interfaces we do. We can’t exactly know what each has as a database to work with – even the people engineering those databases are challenged daily in keeping up with their evolution. But we do know that these databases are populated, loaded up with information gathered from crawling the web. We can be certain that the information that a company publishes about itself, and that others publish about that company, will be in some way accessible to these robots. We know that what we’re saying online is what they’ve got to work with.

Let’s think of an example:

Regardless of how small or how wide the list is of places that the agent deduces could sell milkshakes, the agent always has to create some kind of list when there’s multiple potential matches. We can say that all the matches that made it to the list were considered as matches, and considered as useful for the next step, choosing one. The step that follows the consideration process is the recommendation process: deciding what’s the best match.

If you’re driving along, asking a question to your agent about the closest place that sells milkshakes, you don’t want it to rattle off a list of the ten most likely places that have them. You may need the agent to, if the agent isn’t smart enough to make one recommendation. The goal is to have the agent give you one best answer, plot one route to the best place, do the deciding for you, so you don’t have to. You don’t want to be driving and doing milkshake research. You just want to be told where to go, one place, and have the robot be smart enough to send you to the right place, not the grocery store.

How do I get my brand in those databases?

The answer to this is to speak in the language the robots can be certain of, to publish content using Structured Data, to take your content marketing to the next level and practice Structured Data Marketing. This new dimension of SEO for websites is emerging rapidly as a requirement for staying ahead of the competition. When a website presents its information using Structured Data the crawlers can insert the information into their databases more easily, with more certainty, with less ambiguity. Using Structured Data increases the degree of consideration and the probability of recommendation.

As rapidly as website analytics over the past years have revealed mobile views surpassing desktop views, so too will we see the consideration of Electronic Agents become more important for being competitive than the consideration of human users browsing on mobile phones and desktops combined. Today’s electronic agents might not be smart enough to deliver precise and accurate results all the time today, but their intelligence is only increasing. If your marketing strategy doesn’t include making sure  structured data is being published with content then get it on the table. Start discussing it now with your web developer, making sure your products, services, presences and expertise is being showcased with structured data so that agents consider and recommend your brand ahead of its competition.