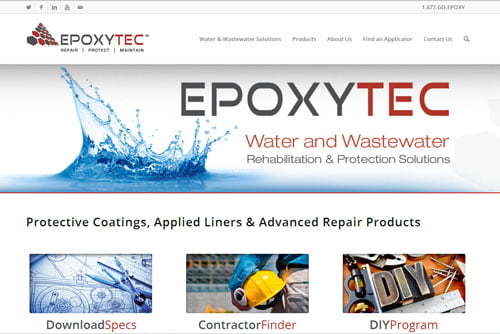 This materials manufacturer website, launched in May 2014, is one of two websites we developed for the Hollywood, FL based company, Epoxytec.

This site is meant to engage Epoxytec’s main audience, water and waste water contractors and engineers who use their products to protect critical infrastructure such as pipes, manholes, lift stations and tanks. The goal of the site was to feature the applications of the product. Understanding how to speak in the language of audience was important.

One great part about doing this design was that Epoxytec had a giant library of images that we leveraged to make this materials manufacturer website a little more exciting visually as opposed to showing images of paint cans.

The site was a redesign of their existing site and copied the style of the brand consistently. There were also a library of existing blog posts that needed to be migrated over from blogger.com. The end result was better than the sum of the parts, relative to the old site. The old site was on this proprietary content management system that performed poorly. Having this site moved to the Massive Impressions servers and put on WordPress was an enormous boost to the domain. This web design will be future proofed for many years to come, providing a platform for great marketing and promotion.

Epoxytec is an epoxy manufacturer headquartered in Hollywood, FL. Most of their clients are in the water and waste water industry.

Visit www.epoxytec.com to see the new site design live. Browse the product pages and the pages that feature the applications of the products.