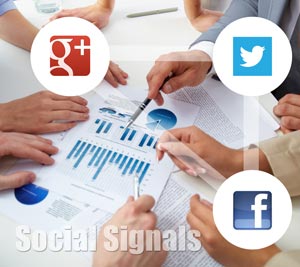 There are ways that social media activity will benefit the search engine ranking of a site. How that benefit is derived might be different than you’d expect. It all has to do with HOW Google crawls social media sites.

This latest video from Matt Cutts explains what the crawlers are designed to see and what they can’t see.

What are the different types of Social Signals and how do they impact SEO?

The term “Social Signals” has been used in different ways in the last few months. The term is undergoing an evolution. At first “social signals” referred to general activity on social media that was expected to have impact on search rank. Now the term is being tightened a bit in its definition. Now it seems, from the recent video from Mr. Cutts, that the term is referring to social metric values over and above the inbound links metrics. Here’s some clarification.

What’s revealed in the video is that the crawlers don’t account for metrics specific to the social media sites, for example, the number of Likes a Facebook Page has or the number of Mentions a Twitter Handle gets. They do, however, consider the social site’s Page Rank and number of links from it to the ranked site.

For a while we’ve been looking closely at the relationship between social and search. A lot of marketers, like us, intuited that Google would take into account the “authority” of a Facebook Page by how many Likes the page had and how many Likes and Comments the Page’s Posts get. Facebook puts a lot of effort into making its metrics rich and accessible, and we’ve put a lot of effort into making sense of them. The expectation was that Google would value those metrics in the algorithm of page ranking. It turns out that is not the case.

It turns out that the Google Crawlers are not engineered to pick up on any per-social site metrics. At first it seems amazing that those factors would be ignored, but the video touches upon the engineers reluctance to build those kind of signals into their algorithm. Being blocked from crawling at some point in the past was mentioned, but since  those metrics are very easily inflated via artificial means, the reasoning is probably deeper than the video has time to reveal. 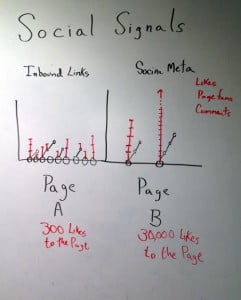 According to Mr. Cutts, social media sites are treated like any other crawlable sites. This means there is no particular attention paid per-se to per-social site metrics when crawling the sites. The Google crawler is strictly counting the total links to a Page from Facebook regardless of where the link originated from within Facebook. This means a lot. What it means is that the quantity of inbound links from Posts and Shares are all that matters.

More Links are Good – Everything Else Doesn’t Matter Yet

From the example shown in the markerboard drawing, consider two pages. The first has three hundred Likes. The second page has 30,000 Likes. In that diagram the first Page, Page A, posts nine inbound links to their Facebook Page. Those posts were shared five times, resulting in a total of fourteen inbound links from Facebook.com to the Page owner’s site.  The second Page only posts two inbound link shares in the same time period. Those Posts were shared five times. This example has Page A, the one  with fewer fans,  having twice the number of inbound links from Facebook than Page B. Even though Page B’s posts got many more Post Likes, and were shared more on average, Page A derives twice the algorithmic impact from Facebook compared to Page B.

So we see that not all “signals” that are visible from within social media sites will be counted by Google. The impact of meta-metrics within Google+ is another issue altogether. Google can see them and connect the dots. We suspect that the changes coming to search engine ranking will involve more and more of those Google+ metrics above and beyond the quantity of inbound links.