What does popularity mean?

If you ask most people graduating with a marketing degree: “How can you measure a website’s popularity?” the first answer they’d provide is “traffic”. It’s not untrue. Traffic is a great measure of popularity. The more people that visit the site, the more popular it is. You can’t argue that.

Traffic is a definition of popularity.

If we consider that definition of popularity, that popularity = traffic, then the question becomes: How does the volume of traffic today impact a site’s search engine ranking in the future? There are studies that demonstrate correlation between traffic and rank, but that’s expected, naturally. What’s important to ask instead is whether the relationship between traffic and rank is causative, in other words: does traffic cause rank and not just naturally rise from it? That’s a lot more difficult to demonstrate as evidenced by the lack of studies. If it caused it people would be reacting.

Back in the 90’s I did some consulting for an online venture. A lot of my engagement with this client involved steering them away from willfully driving off proverbial cliffs. One day I came into the office for a meeting and saw that the conference room and hallways were loaded with temporary workers. They were all told, by the principles of the company, to do nothing more than keep refreshing the site in their browsers all day. It was an “attempt” to drive up the number of their hits. I didn’t want to know why my patrons came to the conclusion that it would be valuable to do this, but it was the last cliff I tried steering them away from. Needless to say they aren’t around any more in spite of my best efforts with them.

They were trying to “game the system” by inflating their hits artificially.  I knew at the time how futile it was. Of course anyone looking at the traffic in detail would recognize that 99% of the site’s traffic came from the same IP. Google wasn’t ever so unsophisticated as to use that kind of traffic as a positive metric. In fact, I’m pretty sure that even back then Google used it as metric of doctored site traffic and a hallmark of a less than credible site. Telling them to discontinue, and why, was one of the last things I remember doing there. 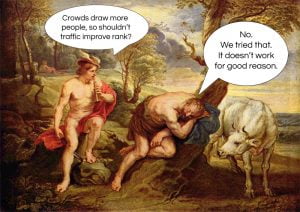 Google is interested in sending its users to sites that have quality content. It’s not interested in sending people to sites that have tried to manipulate their positions. Just as my old client tried to hire people to click all day they could have used other tactics to drive their numbers up. They could have easily written click bait pages on their sites and created click bait ads to get cheap, low quality traffic. They could have run sweepstakes etc. But those tactics don’t make a site more credible to Google at all. Google can’t use traffic as a metric because it can be manipulated too easily. Traffic isn’t one of the top search engine ranking factors, things that cause pages and sites to rank.

There’s a better definition of popularity.

There is a definition of popularity that Google does pay attention to. It’s not popularity in terms of traffic but instead popularity in terms of links. Backlinks are the top factor, for highly competitive terms, that determine search engine rank. A backlink is as link from an external site to yours. The better the quantity and quality of backlinks, the better your search engine rank is. A site that has lots of inbound links, backlinks, is said to have high Authority. If Google considers the sites linking in to be more credible then the quality and impact of the backlink is higher. It’s like when one popular celebrity mentions or endorses another. It causes an increase in “popularity”. The traffic might increase as a result, but what caused that traffic is a better rank, and what caused that better rank was popularity of the site with regards to other sites, not with regards to traffic.

It’s not as easy for a site to get backlinks as it is to get traffic. All good SEO experts involve the creation of backlinks as part of a complete SEO campaign. Google can use the quantity and quality of the backlinks as a more certain way to present its users with more credible links. The whole principle of scoring backlinks was the initial basis of the Google algorithm.  Backlinks are the metric of popularity that you need to pay attention to in order to get Google’s attention and rewards, not traffic. 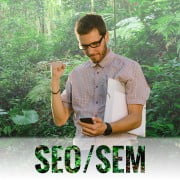 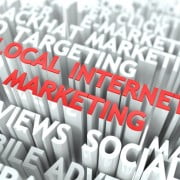 Congratulations to our client: CardioMenderMD Weight Loss – Choosing us for SEO pays off 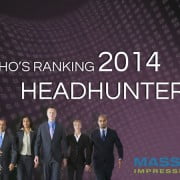 Staffing Industry SEO: Who is Winning in 2014 for the Term: Headhunter 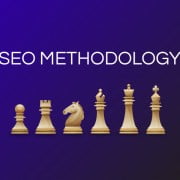 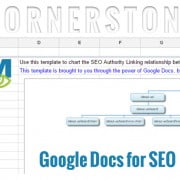 Google Drive is the Killer App for SEO Cornerstone Diagrams 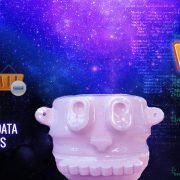 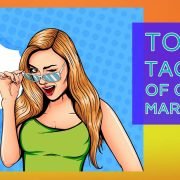 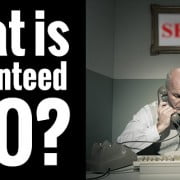